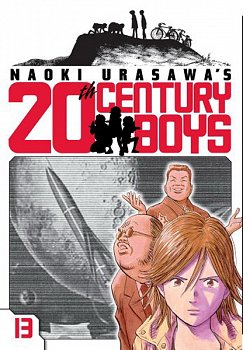 The Friend is dead. As the news spreads around the world, the members of the Friends’ executive committee are faced with a dilemma: Is it all over, or will the events predicted in the New Book of Prophecy still be carried out? Otcho insists that things are not over at all, and that is exactly what his old nemesis—Number 13—tells the fractious Friends’ committee, where quite a few members are prepared to call it quits. Soon thereafter, certain members begin disappearing, one after another.

Also, Otcho relays to Kanna what he learned about her mother, Kiriko. In 2003, Kiriko appeared at Dr. Yamane’s laboratory just as he was developing his deadliest virus yet. The two lab partners would work in tandem, with Yamane developing a new virus and Kiriko contributing a vaccine. But was Dr. Yamane simply being naïve, or did he realize that he was helping to create the means for the Friends to annihilate 99 percent of the world’s population in the year 2015?!