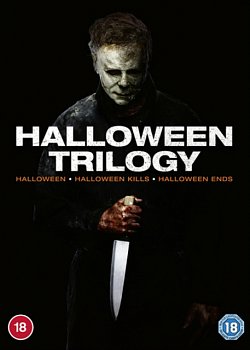 Livrare estimata pentru 18 Feb - 28 Feb
Adauga in cos
Adauga in Wishlist
Descriere: Acest film nu are subtitrare in limba romana.
Triple bill of US horrors co-written and directed by David Gordon Green. In 'Halloween' (2018), set 40 years after the events of the original film, Laurie Strode (Jamie Lee Curtis) once again comes face-to-face with the evil killer Michael Myers (Nick Castle). After spending four decades locked up in a high-security prison, Myers escapes when a bus transporting him crashes, leaving him free to begin a new killing spree. Having spent years preparing for Michael's return, however, Laurie sets out on a mission to find him and finally put an end to the nightmare. In 'Halloween Kills' (2021) Laurie is hospitalised following her confrontation with Myers. Believing Myers to be dead, Laurie is shocked to find out that he has returned to Haddonfield to continue to wreak havoc among the community. Despite her weakened state, Laurie forms a vigilante gang with other survivors in order to hunt down Myers and end his reign of terror. In 'Halloween Ends' (2022), Myers hasn't been seen for four years since the events of 'Halloween Kills' and Laurie is striving to embrace a life free from the long shadow of Myers's violent rampages. When the local murder of a young boy by his babysitter (Rohan Campbell) is framed by the media as a copycat killing in the style of Myers, it instigates a re-emergence of violence which convinces Laurie to end things once and for all.
Din aceeasi serie:
Halloween Kills 2021 DVD Halloween Resurrection 2002 DVD Halloween/Halloween Kills 2021 Blu-ray Halloween/Halloween Kills 2021 DVD Halloween/Halloween Kills/Halloween Ends Blu-ray / Box Set Hellraiser 5 - Inferno 2000 DVD Hellraiser 6 - Hellseeker 2002 DVD Hellraiser 7 - Deader 2005 DVD Hellraiser 8 - Hellworld 2005 DVD Hellraiser: Judgment 2018 Blu-ray