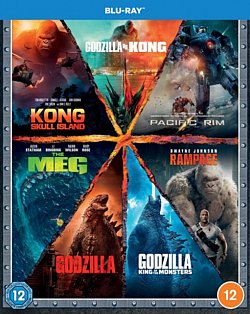 Anunta-ma cand pot comanda
Adauga in Wishlist
Descriere: Acest film nu are subtitrare in limba romana.
Collection of seven action adventures. In 'Pacific Rim' (2013) gigantic monsters known as Kaiju rise up from the Pacific Ocean and invade Earth. As they rage war, killing millions in the process, the human race defends their planet with the use of special robots called Jaegers which are controlled neurally by their pilots. However, even these magnificent machines have trouble defeating the Kaiju. With their armed forces dwindling, mankind puts its faith in ex-pilot Raleigh Becket (Charlie Hunnam) and trainee Mako Mori (Rinko Kikuchi). Together they must control an early Jaeger model in one last attempt to save Earth. In 'Godzilla' (2014), when a devastating event is covered up as a natural disaster, nuclear physicist Joe Brody (Bryan Cranston) realises something much more sinister is to blame. Scientists Dr Ichiro Serizawa (Ken Watanabe) and Dr Vivienne Graham (Sally Hawkins) reveal that in 1954 a powerful monster was awakened and though 'nuclear tests' were carried out in the Pacific Ocean to destroy it, the creature has now returned. With the US Armed Forces, including Joe's son Navy Lieutenant Ford Brody (Aaron Taylor-Johnson), called into action, humanity fights for its survival. In 'Kong - Skull Island' (2017) Bill Randa (John Goodman) has hunted for decades for the proof he needs to convince the world of what he already knows: monsters are real. And in a group of US servicemen commanded by Lt. Col. Packard (Samuel L. Jackson), he thinks he has found the opportunity to get it. The crew, including photographer Weaver (Brie Larson) and Cpt. James Conrad (Tom Hiddleston), set out for a remote island in the Pacific shrouded in mystery. But when they arrive, they are met with the unassailable Kong. Packard confronts Randa, demanding he reveal what he knows before they are all slaughtered. Caught between the fearsome Kong who rules the island and the terrifying creatures that live below, the group must act quickly if they are to survive, and if Randa is to finally reveal the secret of the giant gorilla to the world. In 'Rampage' (2018), when a genetic experiment goes awry, primatologist Davis Okoye (Dwayne Johnson) discovers his friend, a silverback gorilla named George, has been turned into a giant rampaging monster along with Lizzie the crocodile and Ralph the wolf. As the massive creatures tear across the country, Davis teams up with discredited engineer Dr Kate Caldwell (Naomie Harris) to discover who carried out the experiment and synthesise an antidote that will turn the animals back to normal before their trail of destruction gets out of control. In 'The Meg' (2018) deep sea diver Jonas Taylor (Jason Statham) mounts a rescue mission to free a group of scientists from the clutches of a massive megalodon shark. Five years after a similar rescue attempt failed, Jonas is called upon once again to save the crew of a submersible which has lost contact with their research facility, Mana One, during a mission to survey the depths of the ocean. Can he save them from the jaws of the megalodon this time around and earn redemption? In 'Godzilla - King of the Monsters' (2019), set five years after Godzilla wreaked havoc in San Francisco, a host of new titans have awakened to challenge his dominance. While a debate rages about whether the ancient monsters should be killed, the cryptozoological agency Monarch faces off against a group of eco-terrorists who seek to control the monsters and bring about the end of civilisation. As Godzilla battles with Mothra, Rodan and King Ghidorah, Monarch scientists Dr Emma and Mark Russell (Vera Farmiga and Kyle Chandler) and their daughter Madison (Millie Bobby Brown) are drawn into the conflict and race to avert global disaster. Finally, in 'Godzilla Vs Kong' (2021), after Godzilla attacks a facility belonging to Apex Cybernetics, a team of researchers enlist Kong's help to guide them to the Titans' ancient home world in the Earth's core. A clash of the giant monsters threatens to derail the mission, but the adversaries are forced to join forces when a more powerful enemy emerges from the Apex labs.
Din aceeasi serie:
Jeepers Creepers 2001 Blu-ray Kwaidan - The Masters of Cinema Series 1965 Blu-ray Late Phases - Night of the Wolf 2014 Blu-ray Let The Right One In Blu-Ray Let The Right One In DVD Modern Monsters: 7-film Collection 2021 DVD / Box Set My Bloody Valentine 1981 DVD Poltergeist: Collection 1988 Blu-ray / Box Set Poltergeist: Collection 1988 DVD / Box Set Relic 2020 Blu-ray