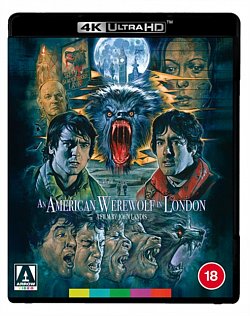 Livrare estimata pentru 22 Aug - 01 Sep
Adauga in cos
Adauga in Wishlist
Descriere: Acest film nu are subtitrare in limba romana.
Horror in which American students David Kessler (David Naughton) and Jack Goodman (Griffin Dunne) are spending their holidays backpacking around England when their adventure turns deadly. Seeking shelter from a storm at unwelcoming Yorkshire inn 'The Slaughtered Lamb', the pair are soon spooked by the hostile locals, who nonetheless warn them not to stray from the road. Sure enough, the duo become lost on the moors and are attacked by a savage animal. Jack is killed, but when David wakes in a London hospital weeks later he is told that his attacker was in fact a rampaging madman. Already shocked and confused, David is horrified to receive a visit from the rotting corpse of an undead Jack, who informs him that the creature which attacked them was in fact a werewolf. Unless David kills himself he will fall prey to the monster's curse at the next full moon, and transform into a savage killer...
Din aceeasi serie:
A Quiet Place: Part II 2020 Blu-ray A Quiet Place: Part II 2020 Blu-ray / 4K Ultra HD + Blu-ray A Quiet Place: Part II 2020 Blu-ray / 4K Ultra HD + Blu-ray (Steelbook) A Quiet Place: Part II 2020 DVD After Darkness 2018 DVD Aquarium of the Dead 2021 DVD Audition Blu-Ray Black Death 2010 DVD Blumhouse of Horrors 10-movie Collection 2019 DVD / Box Set Broadcast Signal Intrusion 2021 Blu-ray