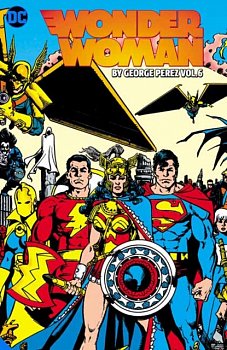 In 1987, writer and artist George Perez reinvented Wonder Woman from the ground up, paying tribute to the character's origins while boldly moving Diana of Themyscira forward; helping to shape the pop culture icon as fans know her today. This collection includes the final stories of Perez's five-year Wonder Woman run, highlighted by the War of the Gods event, a celebration of the character's 50th anniversary that saw Circe manipulating the many gods of the DC Universe against each other, with Earth and its superheroes caught in the crossfire. Along with the main War of the Gods story this volume also includes the final Perez-written issues of the Wonder Woman series, including Diana vs.

Lobo, and the writer-artist's goodbye to Wonder Woman and the Amazons! Collects Wonder Woman #58-62, War of the Gods #1-4.