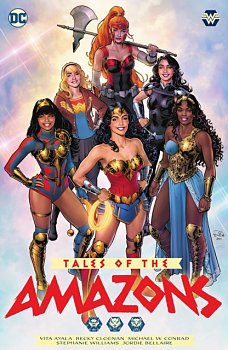 Tales of the Amazons (Hardcover) (comics)

After the events of Dark Nights: Metal Diana has returned from the Sphere of the Gods. Where she should be feeling joyful, Diana can t help feeling lost and purposeless. Has the world moved on without Wonder Woman in her absence? As Diana travels to visit an old friend, she s faced with quite literal dark reflections of herself being puppeteer by her old nemesis, the Image-Maker.

Meanwhile a prophecy of doom has come to the world of the Amazons, all leading to the Trial of the Amazons crossover event! Collects Wonder Woman #781-784; Wonder Woman 80th Anniversary 100-Page Super Spectacular #1; Artemis: Wanted #1; Olympus: Rebirth #1; Nubia: Coronation Special #1.