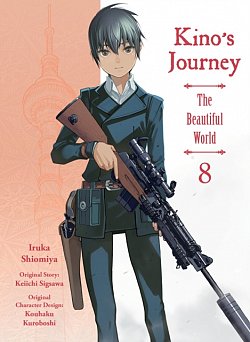 Based on the hit novel series, Kino's Journey now has a beautiful manga adaptation with illustrations by Iruka Shiomiya (Ningen Series).

Master was completely lost in relaxation. With his long legs stretched out on the beach, he peered out at the horizon with a satisfied gaze. He looked so peaceful that he might fall asleep at any moment.
"Oh, dear," I thought.
After three days and three nights of the long, hard battle with the rulers of that land, known as the "Tower Tribe," even Master Shizu was exhausted.

Shizu and his canine companion, Riku, seek passage across the great sea to continue their exploration of the world. But to get across, they have to take a lengthy journey on a gargantuan ship that is its own nation. This new land holds many new experiences and a new friend for the former prince and his talking dog. But before long, Shizu comes across a troubling secret that he can't ignore...
The thrilling tales of travel and discovery come to a close in this final volume of Kino's Journey: The Beautiful World!