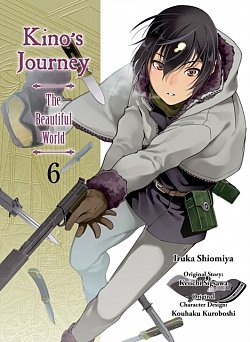 Based on the hit novel series, Kino's Journey now has a beautiful manga adaptation with illustrations by Iruka Shiomiya (Ningen Series).

"We'll be careful, don't worry."
The man in his forties nodded.
His two companions headed for the truck, but he paused.
"Kino," the man said, his expression deadly serious.
"What is it?"
"Ye didn't ask about what's in the back of the truck. Why is that?"
"Why, what's in there?" Kino replied immediately.
The man went silent for a moment, then smiled abruptly.
"Our sin."

In a desolate, snow-covered land, Kino and Hermes find three men in the wilderness starving to death. Despite not knowing the men--nor their intentions--Kino decides to hunt rabbits and cook to nurse them back to health. Though the men are truly thankful for these kind deeds, what Kino doesn't know just might come back to bite them...