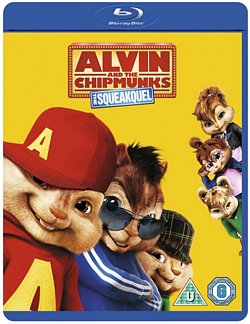 Alvin and the Chipmunks 2 - The Squeakquel 2009 Alt Blu-ray

Sequel to the live-action/CGI-animated story of the world-famous, singing, pre-teen, chipmunk trio. When Alvin (voice of Justin Long), Simon (Matthew Gray Gubler) and Theodore (Jesse McCartney) are forced to put aside their music superstardom and go back to school, they are given the challenge of saving the school's music department by winning the $25,000 prize in a battle of the bands. But the Chipmunks unexpectedly meet their match in three singing female chipmunks known as The Chipettes: Brittany (Anna Faris), Eleanor (Amy Poehler) and Jeanette (Christina Applegate). Romantic and musical sparks fly in the face off that ensues between The Chipmunks and The Chipettes.