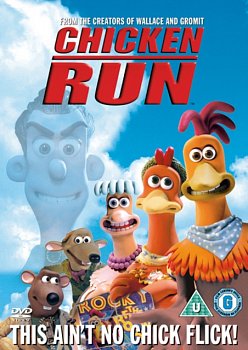 'Wallace and Gromit' progenitor Nick Park's first big screen outing is an animated pastiche of 'The Great Escape'. Life on Tweedy's Chicken Farm is far from pleasant for the inmates; they are badly treated by Mr Tweedy and his domineering wife, and kept alive only as long as they keep producing eggs. Ginger the hen's (voiced by Julia Sawalha) various attempts at escape have failed due to the lethargy and downright incompetence of her fellow prisoners, but when Rocky (Mel Gibson) - the famous Flying Rooster - crash lands in the farm, she sees the chance she has been waiting for: Rocky can teach everyone how to fly, and they can stage a mass break-out! However, the braggardly Rocky is not all that he seems; can he really help Ginger and the others find freedom before Mrs Tweedy (Miranda Richardson) hatches her fowl plan to turn them all into chicken pies?