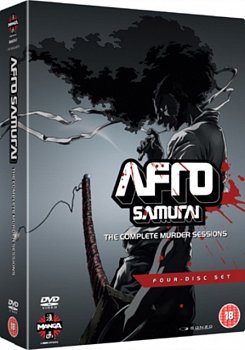 The complete collection of the anime adventure series featuring the voice of Samuel L. Jackson. In the original 2007 series Afro Samurai (Jackson) is out for revenge against a man named Justice (Ron Perlman) who murdered his father. Justice just happens to be the number one fighter in the world and after Afro earns the rank of number two, he begins his lonely quest for revenge. The episodes are: 'Revenge', 'The Dream Reader', 'The Empty Seven Clan', 'Duel' and 'Justice'. The feature-length sequel, 'Afro Samurai: Resurrection' (2009), sees Afro Samurai forced back into the game by Sio (Lucy Liu), a beautiful but deadly woman from his past.