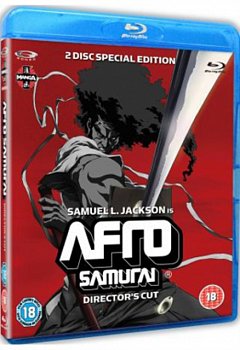 Director's cut of the five-part animated adventure series featuring the voice of Samuel L. Jackson. In a futuristic feudal world of guns, swords, cell phones and cybernetic body parts, Afro Samurai (Jackson) is out for revenge against the man who murdered his father, Justice (Ron Perlman) - who just happens to be the number one fighter in the world. The episodes are: 'Revenge', 'The Dream Reader', 'The Empty Seven Clan', 'Duel' and 'Justice'.