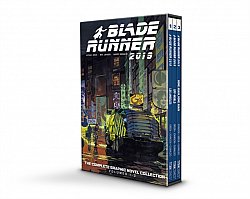 LAPD's best Blade Runner and detective, Aahna 'Ash' Ashina, has been assigned to investigate the mysterious disappearance of Isobel and Cleo Selwyn, the wife and daughter of business tycoon, Alexander Selwyn, a close personal friend of Eldon Tyrell. Ash's search will take her on a journey from the crime-ridden underbelly of Los Angeles to the promised land of the Off-World Colonies and back home again as she uncovers a terrible secret and a desperate conspiracy that forces her to confront her own hatred for Replicants - the synthetic humans that she hunts with such vengeance.