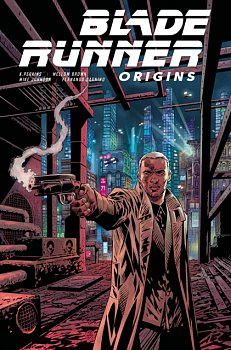 Travel to the world of Blade Runner 2009 and discover the origins of the BLADE RUNNER DIVISION.

When a Tyrell Corporation scientist working on an experimental new type of Replicant is discovered dead in her laboratory, the victim of an apparent suicide, LAPD detective CAL MOREAU is called in to investigate. What he uncovers is a conspiracy of silence so deadly it could change the world as he knows it. Set ten years before the events of the first Blade Runner film, this is the world on the cusp of environmental collapse, and the beginning of the mass Off-world migration to the Off-world colonies. Through its rain-soaked streets, LAPD Detective CAL MOREAU, a PTSD sufferer, must travel as he attempts to unravel the truth behind a seemingly routine suicide that soon reveals itself to be just the thin end of a vast conspiracy, one that runs to the very top of the Tyrell Corporation tower.