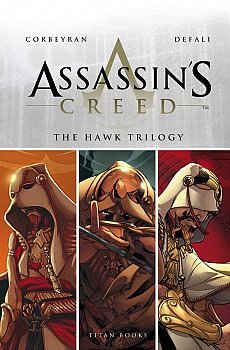 HAWK: When Desmond Miles is called away on an urgent mission, he entrusts fellow Assassin Jonathan Hawk with the search for the Scepter of Isis - a powerful ancient artifact, lost in time.

EL CAKR: In the present day, Assassin Jonathan Hawk fights through a terrible setback to unmask a traitor in the Order's ranks, whilst his ancestor El Cakr battles Templar agents to gain possession of the powerful Scepter of Aset in 13th century Egypt.

LEILA: In 14th century Egypt, the seasoned Assassin El Cakr seeks to return the mysterious Scepter of Aset to the Brotherhood... when it is stolen by a mysterious woman named Leila. Seven centuries later, El Cakr's descendant Jonathan Hawk desperately tries to get his hands on the relic - leading to an ultimate showdown between the Assassins and the Templars. The grand finale of Assassin's Creed's Egyptian saga!