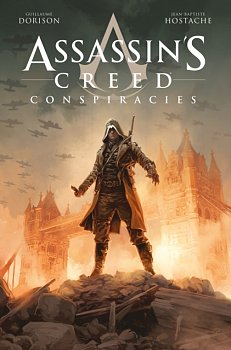 A new era - a new adventure - a new Assassin! Europe, World War II. On the sidelines of the race for the atomic bomb, discover the story of Eddie Gorm and his integration into the Assassin Brotherhood while he infiltrates the Templars to foil their plan to create a devastating weapon.

Eddie Gorm is the boss of the docks and his only obsession is to run his small business. For this, the docker does not shrink from anything: diversion of military rations, traffic of alcohol and settling of account in the district of the East End.
The war? The Nazis? This is the problem of others.
Except that when death knocks on his door, he has no choice: only man to save the world from atomic horror, Eddie finds himself propelled despite himself in the midst of a millennial conflict between the Order of Templars and the Brotherhood of Assassins.