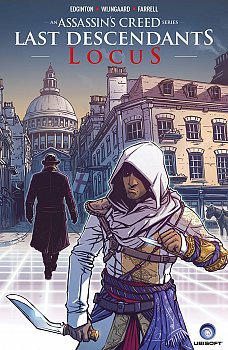 The collection of the young adult mini-series that revisits the streets of Victorian London and tie-ins with the Scholastic Young Adult Novels, The Last Descendants!
Tommy Greyling has travelled to London in search of a murderer - and a secret! Teaming up with the Assassins Evie Frye and Henry Green, he sets out on a quest to uncover the mystery that has changed the world!
Ties-in with the Scholastic Young Adult Novel series, launching August 2016.
Features the characters Evie Frye and Henry Green, stars of the 2015 Assassin's Creed game, Syndicate!
Brand new story in the ever-popular setting of Victorian London!