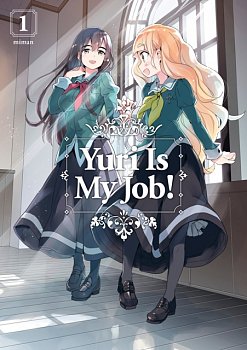 The new, hilarious yuri comedy! Hime gets roped into working at a weird café where the waitresses pretend to be students at an all-girl boarding school. She's strangely taken with her partner Mitsuki, who's so kind to her in front of the customers. There's just one problem... Mitsuki really can't stand her!

Hime is a picture-perfect high school princess--she's admired by all and never trips up! So when she accidentally injures a café manager named Mai, she's willing to cover some shifts to keep her façade intact. To Hime's surprise, the café is themed after a private school where the all-female staff always puts on their best act for their loyal customers. However, under the guidance of the most graceful girl there, she can't help but blush and blunder! Beneath all the frills and laughter, Hime feels tension brewing as she finds out more about her new job and her budding feelings...