Home » Manga » This Is Screwed up but I Was Reincarnated as a GIRL in Another World! 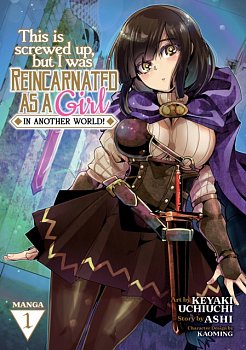 This Is Screwed Up, But I Was Reincarnated as a Girl in Another World! (Manga) V Ol. 1 (manga)

In this isekai tale, a male scientist from Earth is reborn as an orphan girl in a world of swords and sorcery. Ren, a young orphan girl, has been sold off to a merchant with sinister plans for her. Suddenly, memories of her past life on a world called Earth come flooding back, and Ren remembers that she used to be a research scientist-and a grown man! As Ren escapes into the Dark Forest, magical powers awaken within her.

In order to survive the harsh realities of this world, she must use her rekindled knowledge of Earth's science as well as her newfound powers! Will her magical cheat powers and past-life knowledge be enough to keep her freedom, or is she doomed to a life of servitude?