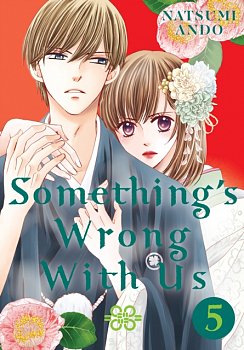 Something's Wrong with Us Vol. 5 (manga)

A spine-chilling and steamy romance between a Japanese sweets maker and the man who framed her mother for murder -- Something's Wrong With Us is the dark, psychological, sexy shojo series readers have been waiting for!

Two Fates Under One Tragic Moon

Nao may have managed to infiltrate Kogetsuan by marrying Tsubaki, but can she discover the truth behind her mother's death without her true identity being exposed? At the invitation of one of the shop's junior employees, Jojima, she pays her first visit in years to the staff quarters where her mother raised her. She feels a natural affinity for this helpful young man, but it turns out the secrets of his past are just as terrifying as her own...