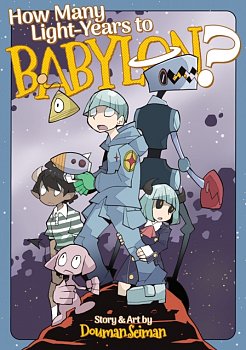 How Many Light-Years to Babylon? (manga)

The self-contained manga by fan-favorite creator Douman Seiman (The Voynich Hotel) that won the Seiun Sci-Fi Award! Follow the tale of an Earthling determined to find out why his home planet was destroyed...while sleeping with as many alien girls as possible.

It can be pretty lonely being the only member of your species--just ask "Bub", an amnesic Earthling who woke up in outer space and discovered that Earth had been destroyed. As he travels through multiple universes, Bub must figure out his past, what happened to his home planet, and how to best pick up alien chicks--the human race won't repopulate itself, after all!

Din aceeasi serie:
A Life Turned Upside Down: My Dad's an Alcoholic (manga)Boy Meets Maria (manga)Devilish Darlings Portal Fantasy (manga)Fragtime (Omnibus) (manga)Hello World: The Manga (manga)I Had That Same Dream Again: The Complete Manga Collection (manga)I Married My Best Friend to Shut My Parents Up (manga)Kageki Shojo!! the Curtain Rises (manga)Love on the Other Side - A Nagabe Short Story Collection (manga)Makeup Is Not (Just) Magic: A Manga Guide to Cosmetics and Skin Care (manga)