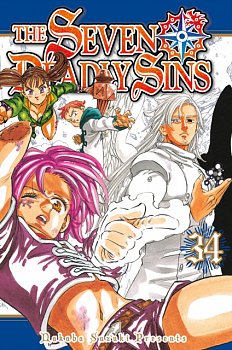 Estarossa continues his path of destruction with the power of three Commandments and his sights set on more. Against such terrifying strength, both his enemies and former allies realize their only chance of defeating him is to work together. Will their strategy be enough, or does the secret to victory lie with Estarossa's connection to Gowther?
Meanwhile, in Purgatory, Meliodas and Ban resolve to escape and fight their way back to the women they love. With the help of Wild, they gear up for their ultimate stand against the Demon King!