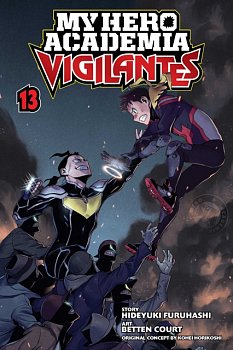 Not everyone needs a license to fight for justice!In a superpowered society, there is nothing ordinary about evil anymore. Heroes, trained and licensed to protect and defend the public against supervillains, stand above all the rest. Not everyone can be a hero, however, and there are those who would use their powers to serve the people without legal sanction.

But do they fight for justice in the shadows, or for reasons known only to themselves? Whatever they fight for, they are called...vigilantes. Number 6 has enacted his plan to bring Naruhata to its knees, releasing dozens of faceless anon drones into the streets. With Koichi still on the run from the authorities, he'll need to come to an understanding with Eraser Head in order to stay free.

When Number 6 goes after Pop in the hospital, the police and Koichi's friends may not be able to stop him, and Koichi will have to face the deranged villain alone...