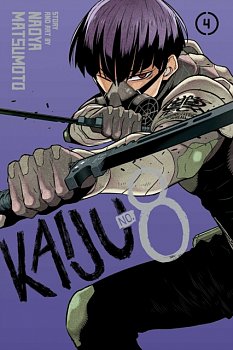 Kafka wants to clean up kaiju, but not literally! Will a sudden metamorphosis stand in the way of his dream?With the highest kaiju-emergence rates in the world, Japan is no stranger to attack by deadly monsters. Enter the Japan Defense Force, a military organization tasked with the neutralization of kaiju. Kafka Hibino, a kaiju-corpse cleanup man, has always dreamed of joining the force.

But when he gets another shot at achieving his childhood dream, he undergoes an unexpected transformation. How can he fight kaiju now that he's become one himself?!The raid on the Defense Force's Tachikawa base continues as the officers expend their efforts to fend off the yoju. Meanwhile, Hoshina unleashes his full combat power to take on the daikaiju-the mightiest kaiju of the group.

Just when the battle seems to be over, the daikaiju transforms and Kafka's detection ability reacts to it! Can Kafka find a way to save the day without revealing his secret?