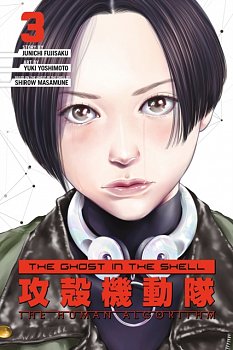 The Ghost in the Shell: The Human Algorithm 3 (manga)

This brand-new chapter fills in the gaps between The Ghost in the Shell: Human-Error Processor and Man-Machine Interface manga with a tense cyberpunk thriller written by Ghost in the Shell: Stand Alone Complex script writer Junichi Fujisaku. Just in time for the release of the new Ghost in the Shell: SAC_2045 anime on Netflix!Togusa and rookie operative Tsunagi of Section 9 have been sent north following reports that Major Kusanagi's artificial body was seen in the city of Towada. Similar rumors send Batou and Ishikawa hundreds of miles south to infiltrate the ranks of a criminal organization in Okinawa.

Over the course of both investigations, Section 9 learns that Hashikami and the killer known as the "White Bear" are plotting to assasinate Shinra Mikomoto, the recently elected mayor of New Port City. This news sends the scattered members of Section 9 swooping down on the city, where everything hinges on the mayor's fate.