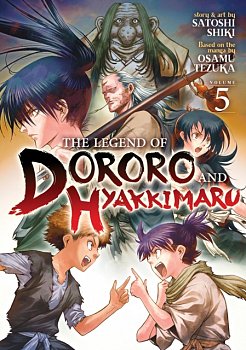 The Legend of Dororo and Hyakkimaru Vol. 5 (manga)

Dororo and Hyakkimaru find themselves guests at the estate of a notoriously cruel steward who is more than he appears. Meanwhile, a mysterious killer with a cursed sword stalks the nearby town, bent on revenge for a lost childhood and missing sister. When the two monsters meet, destruction is bound to follow...

Series Overview:During Japan's tumultuous Sengoku period, one man sells his son to a pack of devils in exchange for the power to rule. Forty-eight devils take forty-eight pieces of young Hyakkimaru, and the boy is left for dead. But through the assistance of a sage and a series of inventive prosthetics, Hyakkimaru survives.

Together with the young thief Dororo, the now-grown Hyakkimaru embarks upon a quest to slay all the demons and retrieve the stolen pieces of his body. This classic story from Osamu Tezuka--the father of modern manga--is now reimagined in this gorgeous new adaptation by Satoshi Shiki, the artist of the manga Attack on Titan: Before the Fall.