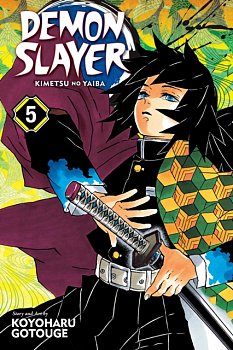 Tanjiro sets out on the path of the Demon Slayer to save his sister and avenge his family!

In Taisho-era Japan, Tanjiro Kamado is a kindhearted boy who makes a living selling charcoal. But his peaceful life is shattered when a demon slaughters his entire family. His little sister Nezuko is the only survivor, but she has been transformed into a demon herself! Tanjiro sets out on a dangerous journey to find a way to return his sister to normal and destroy the demon who ruined his life.

At Mt. Natagumo, Tanjiro, Zenitsu and Inosuke battle a terrible family of spider demons. Taking on such powerful enemies demands all the skill and luck Tanjiro has as he and his companions fight to rescue Nezuko from the spiders' web. The battle is drawing in other Demon Slayers but not all of them will leave Mt. Natagumo alive--or in one piece!