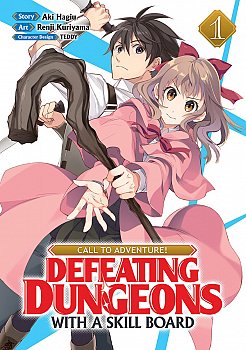 Call To Adventure! Defeating Dungeons With A Skill Board Vol. 1 (manga)

Based on the prize-winning web novels in Japan!

In a time when dungeons and monsters have appeared in our world, a struggling modern adventurer finds a fantasy dungeon-and a special treasure-under his Hokkaido home. Since the discovery of fantastical dungeons all across Earth, slaying monsters and clearing out dungeons has become a popular pastime. Twenty-seven-year-old Karaboshi Haruki dreams of gaining recognition as an adventurer, but he's got two monstrous problems: he's socially invisible and has literally no skills at adventuring.

When a dungeon suddenly appears in his garage, however, he finds a skill board that allows him to level up faster. The dungeon-diving adventures Haruki has always dreamed of are just getting started!