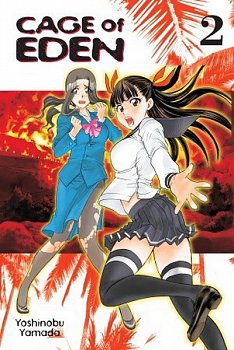 As if being stranded on a deserted island full of prehistoric beasts wasn’t bad enough, now there’s a killer among the human survivors of the plane crash. Akira Sengoku and his classmates are forced to fight and flee dangerous monsters of a bygone era, all while keeping themselves safe from a hockey-masked madman who seems bent on Akira’s destruction. When the chips are down, can Akira and his ragtag band of survivors defend themselves against both man and beast? Find out in this action-packed second volume of Cage of Eden!