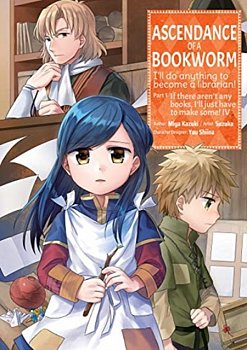 Aspiring apprentice merchants Myne and Lutz have signed a contract with Benno, who has promised to sell their plant-based prototype. With his assistance, they finally have the materials and tools to start making their first batch of washi paper! And Benno wants to sell not only paper, but Myne's other inventions, such as the flower hairpins, as well. But getting involved in the world of merchants makes Myne's life more complicated than ever as she gets registered at the Merchant's Guild and catches the eye of the conniving guildmaster. The more people realize that Myne's ideas can be commodified, the more everyone wants a piece of her. Meanwhile, as Myne displays more and more of her otherworld knowledge and adult-like behavior, Lutz has grown suspicious of her real identity... What will Myne do when he demands to know who she really is? How could she ever explain that the real Myne is gone forever?