Home » Manga » Arakawa Under the Bridge 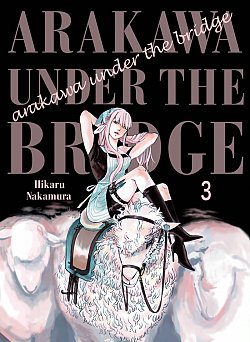 Arakawa Under the Bridge Vol. 3 (manga)

Best-selling mangaka Hikaru Nakamura (Saint Young Men) makes her English language debut with this surreal comedy starring a 620-year-old water sprite, a man with a star for a head, a nun, and a samurai who runs a barber shop under Tokyo’s Arakawa Bridge. Part 3 contains volumes 5 and 6 of the Japanese edition. “Nino, I promise that I can accept everything about you!” Rec calls out when he discovers Nino’s secret trove of cassette tapes. Rec and Nino are both clumsy when it comes to communication, which leads to situations both humorous and heartbreaking. Once in a while a sombre mood falls upon the river bank under the bridge… until the next absurd turn of events comes around.