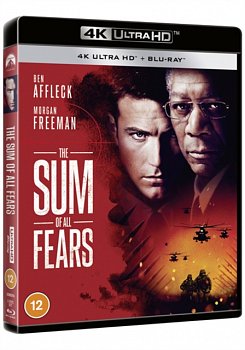 Livrare estimata pentru 11 Jul - 21 Jul
Adauga in cos
Adauga in Wishlist
Descriere: Acest film nu are subtitrare in limba romana.
America's security community is on edge. The Russian premier has just died and been replaced by President Zorkin (Richard Marner) a man whose international ambitions are something of an unknown quantity. Fortunately seasoned CIA agent Jack Ryan (Ben Affleck) is on hand to profile the man in the hot seat. But then the USA's worst fear comes true when Baltimore is struck by a nuclear device during a football game. Ryan's boss Cabot (Morgan Freeman), is convinced this isn't really a Russian strike and dispatches Ryan to uncover the truth before the USA and Russian Federation slide into WWIII. A shadowy terrorist group might just hold the key.
Din aceeasi serie:
The Stranger Blu-Ray The Stranger DVD The Stranger DVD The Stranger Within DVD The Strangers In 7A DVD The Sum Of All Fears Blu-Ray The Sum Of All Fears DVD The Survivalist Blu-Ray The Survivalist DVD The Survivor Blu-Ray