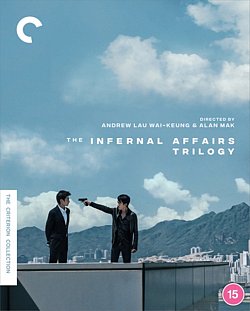 Livrare estimata pentru 10 Feb - 20 Feb
Adauga in cos
Adauga in Wishlist
Descriere: Acest film nu are subtitrare in limba romana.
Trilogy of Hong Kong gangster action thrillers. In 'Infernal Affairs' (2002) the cops and the Triads have something in common: each has a mole in their midst. Lau Kin Ming (Andy Lau) and Chen Ying Yan (Tony Leung) have been leading parallel lives: Ming is a Triad mole who has infiltrated the police department and Yan is an undercover cop who has, over the years, risen to a position of authority in the Triad gang. Both are dissatisfied with their position, wishing they could put their false lives behind them. Then one night the two men's paths finally cross during a police raid. Both the police and the Triads realise they have informers amongst them and the race begins for Ming and Yan to get out alive. 'Infernal Affairs 2' (2003) is a prequel, set ten years before the events of the original film. Yan (Shawn Yue) has just become an undercover cop in the Triads, while Ming (Edison Chen) is a new recruit to the police force. Bitter enemies in the first film, Inspector Wong (Anthony Wong) and Sam (Eric Tsang) are behaving like old friends, while Yan is embroiled in the family saga of a Triad cartel and Ming has developed an oedipal fixation on his boss's wife. As friendships fracture and foes join forces, nothing is as it first appears to be. Finally, in 'Infernal Affairs 3' (2003) Ming (Lau)'s career is on the slide following the bloody events of the first film, and he has been transferred to office work while he undergoes an investigation by internal affairs. Suspicious of new rising star Yeung (Leon Lai), Ming begins to investigate his background, convinced that he could be a double-agent working for the notorious Triad gangs. But as Ming investigates, is it possible that he is being led into a trap by the charismatic young officer?
Din aceeasi serie:
The Hunt 2020 DVD The Hunted DVD The I Inside DVD The Iceman DVD The Imposter 2012 DVD The Infiltrator Blu-Ray The Infiltrator DVD The Informers DVD The Innocent Sleep DVD The Insider 1999 DVD / Widescreen