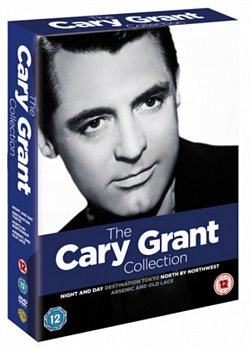 Livrare estimata pentru 14 Dec - 24 Dec
Adauga in cos
Adauga in Wishlist
Descriere: Acest film nu are subtitrare in limba romana.
Box set comprising four classic Cary Grant films as well as a documentary about his life and work made in 2004, 'Cary Grant: A Class Apart'. 'Night and Day' (1946) is a fictionalized biography of Cole Porter, made while the composer was still alive, starring Grant in the title role. The film begins in the 1910s when Porter is at Yale University, then follows him through the First World War, in which he works as an ambulance driver in France and marries a nurse from an aristocratic family (Alexis Smith). Director Michael Curtiz then focuses on Porter's glittering career through the 1940s, and the film contains performances of many of his most famous songs. It is now generally conceded that many of the facts on which the film is based are wildly inaccurate: Porter was in fact gay and married a divorcee friend for convenience, and his much-feted military experiences were a hoax. 'Destination Tokyo' (1943) is a suspenseful wartime drama about a US submarine, USS Copperfin, sent into Tokyo harbour under secret orders in the early days of the Second World War. Cary Grant plays the submarine's commander, whose mission is to get the submarine and its crew into the harbour undetected and send a landing party ashore in order to obtain vital information for the planned Doolittle air raid on Tokyo. 'North By Northwest' (1959) is a masterful mix of comedy and suspense from Alfred Hitchcock. Advertising executive Roger Thornhill (Grant) is lunching in a restaurant with his mother when he mistakenly answers a page for one George Kaplan. He soon finds himself on the run across the country, being pursued by enemies of the government who are convinced that he is a secret agent. He finds a friend in Eve Kendall (Eve Marie Saint), who helps conceal him during a perilous train journey, but soon discovers that she is not all she seems. 'Arsenic and Old Lace' (1944) is a macabre comedy about the elderly Brewster sisters, who poison lonely old men to put them out of their misery and bury them in their basement. When their nephew Mortimer (Grant) calls to announce his engagement, he discovers the grisly family secret. To complicate matters, his evil sibling Jonathan (Raymond Massey) has just escaped from jail, and arrives at the family home with murderous intentions of his own.
Din aceeasi serie:
The Car Blu-Ray The Card Counter 2021 Blu-ray The Card Counter 2021 DVD The Carrier DVD 2014 The Carrier DVD 2015 The Cat And The Canary DVD The Challenge (Aka It Takes A Thief) DVD The Chamber Blu-Ray The Chamber DVD The Changeover 2017 DVD