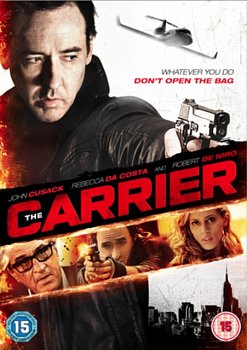 Livrare estimata pentru 13 Oct - 23 Oct
Adauga in cos
Adauga in Wishlist
Descriere: Acest film nu are subtitrare in limba romana.
Crime thriller starring John Cusack, Rebecca Da Costa and Robert De Niro. Assassin Jack (Cusack) is given a new assignment by his ruthless boss Dragna (De Niro): he must collect a bag without looking inside it and stay at a motel until Dragna arrives. At the motel there are many suspicious characters who all seem to want to get their hands on the bag and the murder count rises as Jack protects its contents. He meets prostitute Rivka (Da Costa), who is hiding out in his room, and is unsure whether he can trust her but allows her to stay because she knows too much. When Dragna eventually comes to the motel Jack learns that there is more to the mission than he first realised...
Din aceeasi serie:
The Calling DVD The Cape Town Affair DVD The Car Blu-Ray The Card Counter 2021 Blu-ray The Card Counter 2021 DVD The Carrier DVD 2015 The Cary Grant Collection DVD The Cat And The Canary DVD The Challenge (Aka It Takes A Thief) DVD The Chamber Blu-Ray