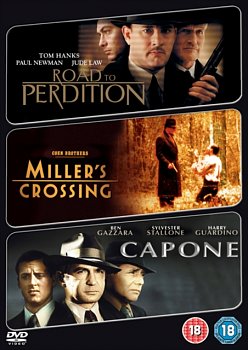 Anunta-ma cand pot comanda
Adauga in Wishlist
Descriere: Acest film nu are subtitrare in limba romana.
Collection of three gangster films. 'Road to Perdition' (2002) is set in the American Midwest of the 1930s. 12-year-old Michael Sullivan Jr (Tyler Hoechlin) is curious about what his father (Tom Hanks) does for a living, and one night decides to hide in his car as he goes off to work. It soon transpires that the elder Sullivan is a hitman for the mob, and when young Michael witnesses a killing carried out by the gangster bossman's son Connor (Daniel Craig), it starts off a chain of events which will mark Michael's life forever. The film co-stars Paul Newman and Jude Law and is directed by Sam Mendes. In the Coen brothers' 'Miller's Crossing' (1990), crime boss Leo (Albert Finney) is asked to kill a chiseller who's moving in on someone else's action, only to discover that his target is the brother of his girlfriend. However, his girlfriend is two-timing Leo with his gambler friend Tom (Gabriel Byrne), who is also ordered to kill the chiseller after he joins a rival faction. Finally, 'Capone' (1975) tells the life story of America's most notorious gangster, Al Capone (Ben Gazarra). The film features footage from producer Roger Corman's 1967 movie 'The St. Valentine's Day Massacre'. Capone's rise from humble beginnings to becoming Chicago's mobster king prefaces his downfall on tax charges, in a campaign apparently orchestrated against him by his own aide (Sylvester Stallone).
Din aceeasi serie:
Rivers Edge Blu-Ray Rivers Edge DVD Road Games DVD Road to Paloma 2014 Blu-ray Road To Paloma DVD Robbery Blu-Ray Robert Altmans Images Blu-Ray RocknRolla Blu-Ray RocknRolla DVD Roman J Israel Esq DVD