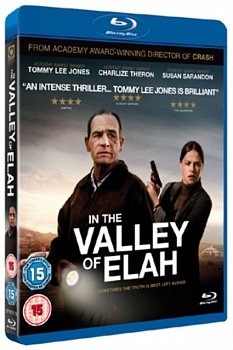 Livrare estimata pentru 18 Feb - 28 Feb
Adauga in cos
Adauga in Wishlist
Descriere: Acest film nu are subtitrare in limba romana.
Thriller starring Tommy Lee Jones and Charlize Theron. After being informed that his son, Mike (Jonathan Tucker), has gone missing after his return from a tour of duty in Iraq, Mike's father Hank (Jones) travels to his son's military base to see if he can make any sense of his disappearance. Hank soon becomes frustrated by the lack of interest shown in the case by the military and the police, and with the help of Detective Emily Sanders (Theron), takes matters into his own hands. The pair begin to piece together the events that led to Mike's disappearance, making some interesting discoveries in the process.
Din aceeasi serie:
In Fear DVD In the Blood 2014 DVD In the Blood 2014 DVD Alt In The Cut DVD In The Electric Mist DVD In The Valley Of Elah DVD In Their Skin DVD Incident On A Dark Street DVD Inferno / Angels And Demons / Da Vinci Code DVD Inferno 2016 Blu-ray / Steel Book