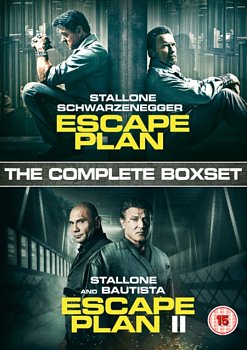 Livrare estimata pentru 21 Dec - 31 Dec
Adauga in cos
Adauga in Wishlist
Descriere: Acest film nu are subtitrare in limba romana.
Double bill of action thrillers from the 'Escape Plan' series. In 'Escape Plan' (2013) structural security specialist Ray Breslin (Sylvester Stallone) is paid to enter high-security prisons and escape while highlighting weaknesses in their apparently escape-proof systems. But when he is framed and incarcerated in a prison of his own design which is run by the relentless Warden Hobbes (Jim Caviezel), he has to put his incomparable skills to the ultimate test. However, in order to escape this particular prison he'll need the help of another insider. Luckily he meets fellow prisoner and old-timer Swan Rottmayer (Arnold Schwarzenegger) who agrees to help Ray in his escape, but only if Ray agrees to free him while doing so... In 'Escape Plan 2' (2018) security expert Ray Breslin must once again utilise his skills when one of his team is trapped inside a ruthless alternative maximum security prison named Hades. With the only option being to infiltrate Hades and rescue his friend Shu (Huang Xiaoming), Breslin must find a way in and find a way out. With the watertight levels of security in Hades and every inmate working to stay alive, the high-security veteran must act fast if he is to not only save Shu but to make it out alive himself.
Din aceeasi serie:
Escape Plan 3 2019 Blu-ray Escape Plan 3 2019 DVD Escape Plan Blu-Ray Escape Plan DVD Escape Plan/Escape Plan 2/Escape Plan 3 2019 DVD / Box Set Escape Room 2 - Tournament of Champions 2021 Blu-ray Escape Room 2 - Tournament of Champions 2021 DVD Escobar DVD Escobar - Paradise Lost Blu-Ray Escobar - Paradise Lost DVD