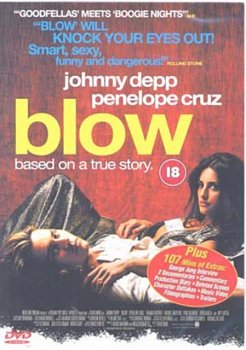 Livrare estimata pentru 14 Jul - 24 Jul
Adauga in cos
Adauga in Wishlist
Descriere: Acest film nu are subtitrare in limba romana.
Johnny Depp stars as drug smuggler George Jung in this biographical crime drama. Having seen his parents defeated by poverty as a young boy in Massachusetts, George vows to do better for himself and begins a marijuana dealing operation after moving to LA. When his dealing eventually lands him in jail, an opportunity to join the big league beckons and he is offered the chance to work for the infamous Medellín Cartel. On release, George seizes the opportunities of the 1970s American cocaine boom, establishing himself as Pablo Escobar (Cliff Curtis)'s main US importer. But George doesn't have the icy determination for a business that is lethal to its own, and soon his relationship with his wife Mirtha (Penélope Cruz) is on the rocks and his business is dissolving around him.
Din aceeasi serie:
Blood Feud DVD Blood In Blood Out DVD Blood Money DVD Blood Orange DVD Blood Ties DVD Blow-Up DVD Blue Steel DVD Blue Velvet - Special Edition Blu-Ray Blue Velvet - Special Edition Unseen Footage DVD Bonded By Blood 2010 DVD