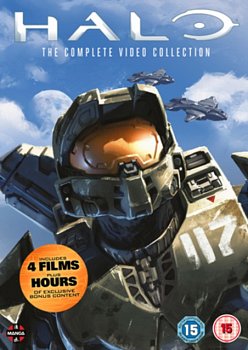 Livrare estimata pentru 10 Feb - 20 Feb
Adauga in cos
Adauga in Wishlist
Descriere: Acest film nu are subtitrare in limba romana.
Collection of all on-screen titles from the 'Halo' game franchise. In 'Halo: Legends' (2010), an anthology of anime-style short films explores the origin and historical events of the Halo universe, following the adventures of the various characters that inhabit it. In 'Halo: Forward Unto Dawn' (2012), it is the year 2525 and Thomas Lasky (Tom Green), a cadet at the military academy of the United Nations Space Command, is in a state of turmoil. In training to fight against human insurrectionaries from the rebellious outer colonial planets, he has doubts about whether the war is justified and worries that this will affect his performance on the battlefield. However, when the academy is attacked by an alien race his allegiances aren't in question. Teaming up with a formidable armoured soldier known as the Master Chief (voice of Alex Puccinelli), Thomas battles to protect those he loves from the forces of invasion. In 'Halo: Nightfall' (2015), the Xbox Originals series follows Agent Jameson Locke (Mike Colter) and his team as they find themselves caught up in a terrorist attack in the distant land of Sedra. Finally, in 'Halo: The Fall of Reach' (2015), the Xbox Originals series discovers the origin of the Spartan program that set Master Chief and Dr. Catherine Halsey (Jen Taylor) on their journey to Halo Iore.
Din aceeasi serie:
Halo: Nightfall 2015 Blu-ray / Collector's Edition Halo: Season One 2022 Blu-ray / 4K Ultra HD Boxset Halo: Season One 2022 Blu-ray / 4K Ultra HD Boxset (Steelbook) Halo: Season One 2022 Blu-ray / Box Set Halo: Season One 2022 DVD / Box Set Haven: Season 5 - Volume 1 2014 DVD Humans Series 3 DVD Intergalactic 2021 Blu-ray Intergalactic 2021 DVD Jericho Seasons 1 to 2 Complete Decisive Boxset DVD