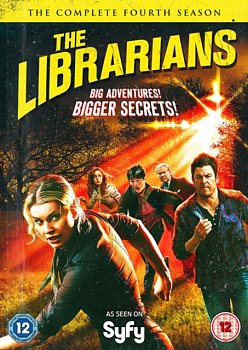 Livrare estimata pentru 10 Jun - 20 Jun
Adauga in cos
Adauga in Wishlist
Descriere: Acest film nu are subtitrare in limba romana.
The complete fourth season of the American fantasy drama created by John Rogers. When Eve Baird (Rebecca Romijn) is chosen as the latest Guardian of the library, she has her work cut out for her when she realises she has become part of an ancient order dedicated to protecting the world from the magic that lies inside the books. In this season, Eve, Flynn (Noah Wyle) and Jenkins (John Larroquette) go to a party hosted by Santa Claus, Flynn and Eve are sucked into a film noir movie and Jenkins switches bodies with a 28-year-old named Jeff (Andrew Caldwell). The episodes are: 'And the Dark Secret', 'And the Steal of Fortune', 'And the Christmas Thief', 'And the Silver Screen', 'And the Bleeding Crown', 'And the Graves of Time', 'And the Disenchanted Forest', 'And the Hidden Sanctuary', 'And a Town Called Feud', 'And Some Dude Named Jeff', 'And the Trial of the One' and 'And the Echoes of Memory'.
Din aceeasi serie:
The Incredible Hulk Seasons 1 to 5 Complete Collection Blu-Ray The Incredible Hulk: The Complete Collection 1982 DVD / Box Set The Invincible Iron Man 2007 DVD The Invisible Man - The Complete Series DVD The Librarians: The Complete First Season 2014 DVD The Librarians: The Complete Second Season 2015 DVD / Box Set The Librarians: The Complete Third Season 2017 DVD / Box Set The Originals Season 1 DVD The Originals Season 2 DVD The Originals Season 3 DVD