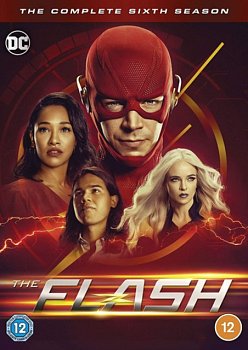 All 19 episodes from the sixth season of the action adventure following the DC Comics superhero. After being struck by lightning and covered in chemicals while in his laboratory, forensic scientist Barry Allen (Grant Gustin) wakes up from a coma to find he has superhuman powers. He decides to use his new abilities to fight other superhumans created by the storm who are using their powers for evil in Central City. In this season, Barry deals with the loss of his daughter while battling new enemies Bloodwork (Sendhil Ramamurthy) and Mirror Master Eva McCulloch (Efrat Dor). The episodes are: 'Into the Void', 'A Flash of the Lightning', 'Dead Man Running', 'There Will Be Blood', 'Kiss Kiss Breach Breach', 'License to Elongate', 'The Last Temptation of Barry Allen: Part 1', 'The Last Temptation of Barry Allen: Part 2', 'Crisis On Infinite Earths: Part Three', 'Marathon', 'Love Is a Battlefield', 'A Girl Named Sue', 'Grodd Friended Me', 'Death of the Speed Force', 'The Exorcism of Nash Wells', 'So Long and Goodnight', 'Liberation', 'Pay the Piper' and 'Success Is Assured'.