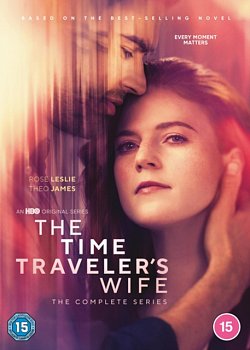 Livrare estimata pentru 21 Dec - 31 Dec
Adauga in cos
Adauga in Wishlist
Descriere: Acest film nu are subtitrare in limba romana.
All six episodes from the first season of the US sci-fi romantic drama based on the novel by Audrey Niffenegger. Henry DeTamble (Theo James) is afflicted with a rare genetic disorder that causes him to become unstuck in time, flitting uncontrollably between various moments in his life. As a young girl, Claire (Rose Leslie) once met Henry during one of his travels, and ever since that moment their two fates have become entwined. Later in life, the two become married, but the reality of living with Henry's disorder threatens to tear the destined couple apart.
Din aceeasi serie:
The State Within DVD The Stephen Poliakoff Collection (6 Films) DVD The Strauss Family - The Complete Series DVD The Suspicions Of Mr Whicher - The Ties That Bind DVD The Tenant Of Wildfell Hall DVD The Trial of Christine Keeler 2020 DVD The Tudors Season 1 DVD 2007 The Tudors Season 1 DVD 2007 Alt The Tudors: The Complete Series 2010 DVD / Box Set The Tunnel Series 1 Blu-Ray