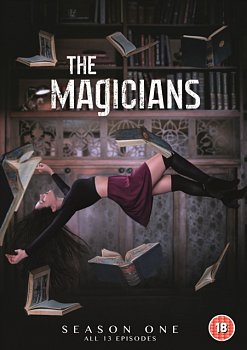 The Magicians: Season One 2016 DVD

Anunta-ma cand pot comanda
Adauga in Wishlist
Descriere: Acest film nu are subtitrare in limba romana.
All 13 episodes from the first season of the American drama series which follows a group of students studying to become magicians. After enrolling at Brakebills College for Magical Pedagogy, Quentin Coldwater (Jason Ralph) soon discovers that the magic he has read about since childhood is actually real and much more powerful than he could have imagined. With the assistance of his long-time friend Julia (Stella Maeve), who works for a secret magical society, Quentin must put his abilities to the test as he faces a number of dark forces from the magical underworld. The episodes are: 'Unauthorized Magic', 'The Source of Magic', 'Consequences of Advanced Spellcasting', 'The World in the Walls', 'Mendings, Major and Minor', 'Impractical Applications', 'The Mayakovsky Circumstance', 'The Strangled Heart', 'The Writing Room', 'Homecoming', 'Remedial Battle Magic', 'Thirty-Nine Graves' and 'Have You Brought Me Little Cakes'.
Din aceeasi serie:
The Legacy Season 3 DVD The Legacy: Season 2 2015 Blu-ray The Level DVD The Living And The Dead Blu-Ray The Living And The Dead DVD The Male Of The Species DVD The Man In Room 17 Series 1 DVD The Missing Series 1 and 2 DVD The Missing Series 1 Blu-Ray The Missing Series 1 DVD