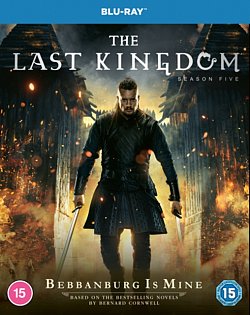 Livrare estimata pentru 21 Jul - 31 Jul
Adauga in cos
Adauga in Wishlist
Descriere: Acest film nu are subtitrare in limba romana.
All ten episodes from the fifth and final season of the historical BBC drama centred around the wars between the Saxons and Danes during the ninth century. Alexander Dreymon stars as the warrior Uhtred of Bebbanburg, the son of a Saxon nobleman who was captured by the Danes as a child and raised as one of their own. In this season, Uhtred is raising Aethelstan (Harry Gilby) and training him to become a warrior while Brida (Emily Cox) is seeking revenge.
Din aceeasi serie:
The Interceptor DVD The Knick Season 1 Blu-Ray The Knick Season 1 DVD The Knick Season 2 Blu-Ray The Knick Season 2 DVD The Last Kingdom: Season Four 2019 Blu-ray / Box Set The Last Kingdom: The Complete Series 2022 Blu-ray / Box Set The Last Post DVD The Legacy Season 1 Blu-Ray The Legacy Season 1 DVD