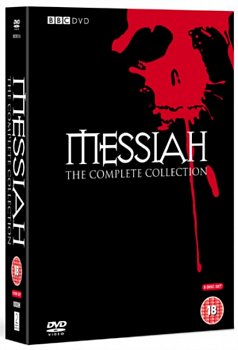 Livrare estimata pentru 10 Feb - 20 Feb
Adauga in cos
Adauga in Wishlist
Descriere: Acest film nu are subtitrare in limba romana.
All five instalments of the dark BBC crime drama series following the investigations of Detective Red Metcalfe (Ken Stott). The first series, comprising 'The First Killings' and 'The Reckoning', is set in sweltering London summer. A serial killer is targeting wealthy men, slaughtering them and replacing their tongues with silver spoons. The man appointed to track the murderer down is DCI Red Metcalfe, renowned for his ability to get under the skin of any killer. However, this knack seems to desert him as the body count continues to rise without providing the slightest clue to link the otherwise unrelated victims. In the second series, 'Vengeance Is Mine', things get personal for Metcalfe when his own estranged brother is found stabbed at the busy Leadenhall Market. As the body count rises, the horrifying truth begins to dawn: a sadistic serial killer is on the loose, and none of the investigators - or their nearest and dearest - are safe. In 'The Promise', Metcalfe struggles with an uneasy conscience even as he races against time to catch a sadistic killer stalking the corridors of a hospital. In 'The Harrowing', Metcalfe finds that the hunt for a serial killer is beginning to affect him in ways he could not have anticipated. As the clues left by the killer become more confusing, can he stop him in time to save more innocent people from being hurt? In the fifth and final series, Marc Warren stars as DCI Joseph Walker, taking over from Ken Stott's character. In this instalment, Walker's renowned instincts and tenacity of character are questioned as his personal demons invade his investigation.
Din aceeasi serie:
Mayday DVD Mayor Of Casterbridge DVD Mayor of Kingstown: Season One 2022 Blu-ray / Box Set Mayor of Kingstown: Season One 2022 DVD / Box Set Messiah Series 1 to 2 DVD Mike Leigh - At The BBC DVD Minder - The Complete Collection DVD Misfits: Series 1-5 2013 DVD / Box Set Mister Jericho DVD Mistresses Series 1 to 3 Boxset DVD