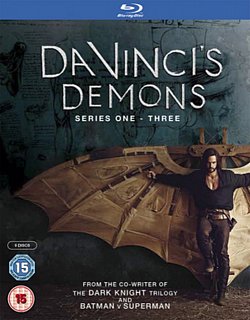 Livrare estimata pentru 09 Oct - 19 Oct
Adauga in cos
Adauga in Wishlist
Descriere: Acest film nu are subtitrare in limba romana.
All 28 episodes from the first three series of the historical drama created by David S. Goyer inspired by the life of the legendary Renaissance artist Leonardo Da Vinci. At the age of 25, Da Vinci (Tom Riley) finds himself at a crossroads in his life. Possessed of a vision of a future free from religious and economic tyranny - and the artistic ability to bring his imagination to life - he nonetheless finds himself caught up in the machinations of the papacy and the all-powerful Medici family. As recognition of his gifts brings Leonardo to the attention of the powers-that-be, he will be forced to make a series of decisions that will not only define his own life, but have major ramifications for the future of the arts and human civilisation. Series 1 episodes are: 'The Hanged Man', 'The Serpent', 'The Prisoner', 'The Magician', 'The Tower', 'The Devil', 'The Hierophant' and 'The Lovers'. Series 2 episodes are: 'The Blood of Man', 'The Blood of Brothers', 'The Voyage of the Damned', 'The Ends of the Earth', 'The Sun and the Moon', 'The Rope of the Dead', 'The Vault of Heaven', 'The Fall from Heaven', 'The Enemies of Man' and 'The Sins of Daedalus'. Series 3 episodes are: 'Semper Infidelis', 'Abbadon', 'Modus Operandi', 'The Labrys', 'Anima Venator', 'Liberum Arbitrium', 'Alis Volat Propriis', 'La Confessione Della Macchina', 'Angelus Iratissimus' and 'Ira Deorum'.
Din aceeasi serie:
CSI Miami: The Complete Season 5 2007 DVD / Box Set CSI Miami: The Complete Season 9 2011 DVD / Box Set CSI New York: Complete Season 4 2008 DVD / Box Set Cuffs DVD Da Vincis Demons Series 1 to 3 Complete Collection DVD Das Boot: Season Three 2022 Blu-ray / Box Set Das Boot: Season Three 2022 DVD / Box Set DCI Banks Series 1 DVD DCI Banks Series 2 DVD Degrassi Junior High Season 1 DVD