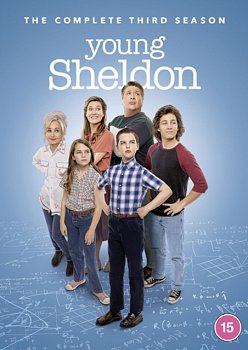 Livrare estimata pentru 13 Jul - 23 Jul
Adauga in cos
Adauga in Wishlist
Descriere: Acest film nu are subtitrare in limba romana.
All 21 episodes from the third season of the comedy spin-off of 'The Big Bang Theory' starring Iain Armitage as a young Sheldon Cooper. The show follows the child genius as he begins attending high school in East Texas but finds himself struggling to fit in with those around him. The episodes are: 'Quirky Eggheads and Texas Snow Globes', 'A Broom Closet and Satan's Monopoly Board', 'An Entrepreneurialist and a Swat On the Bottom', 'Hobbitses, Physicses and a Ball With Zip', 'A Pineapple and the Bosom of Male Friendship', 'A Parasol and a Hell of an Arm', 'Pongo Pygmaeus and a Culture That Encourages Spitting', 'The Sin of Greed and a Chimichanga from Chi-Chi's', 'A Party Invitation, Football Grapes and an Earth Chicken', 'Teenager Soup and a Little Ball of Fib', 'A Live Chicken, a Fried Chicken and Holy Matrimony', 'Body Glitter and a Mall Safety Kit', 'Contracts, Rules and a Little Bit of Pig Brains', 'A Slump, a Cross and Roadside Gravel', 'A Boyfriend's Ex-Wife and a Good Luck Head Rub', 'Pasadena', 'An Academic Crime and a More Romantic Taco Bell', 'A Couple Bruised Ribs and a Cereal Box Ghost Detector', 'A House for Sale and Serious Woman Stuff', 'A Baby Tooth and the Egyptian God of Knowledge' and 'A Secret Letter and a Lowly Disc of Processed Meat'.
Din aceeasi serie:
Year of the Rabbit 2019 DVD Yonderland - The Christmas Special DVD You Rang M’lord - Series 1 to 4 Complete Collection DVD Young Rock: Season One 2021 Blu-ray Young Rock: Season One 2021 DVD Young Sheldon Season 1 DVD Young Sheldon: The Complete Fourth Season 2021 DVD Young Sheldon: The Complete Second Season 2019 DVD Yus My Dear Series 1 DVD