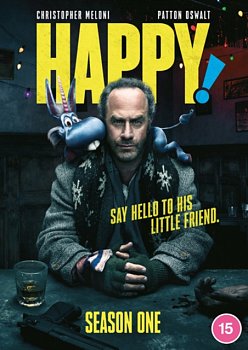 All eight episodes from the first season of the comedy action series starring Christopher Meloni as uncompromising former cop Nick Sax who now works as a hitman to fund his debauched lifestyle. Following a job that goes awry Nick's life flashes before his eyes and when he re-emerges he has visions of a small talking creature known as Happy (voice of Patton Oswalt). When Happy reveals that he is the imaginary friend of a young girl who is being held hostage by a villain known as Very Bad Santa (Joseph D. Reitman), Nick does all he can to ensure her safety and release but the unlikely duo find themselves in constant conflict over their differing outlooks on life. The episodes are: 'Saint Nick', 'What Smiles Are For', 'When Christmas Was Christmas', 'Year of the Horse', 'White Sauce? Hot Sauce?', 'Losing My Religion', 'Thus Thrust Zarathustra' and 'I Am the Future'.