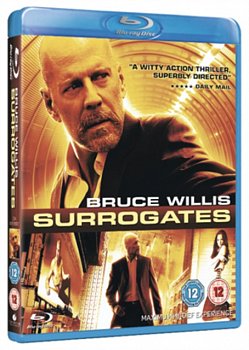 Anunta-ma cand pot comanda
Adauga in Wishlist
Descriere: Acest film nu are subtitrare in limba romana.
Science fiction film set in a future where humans live in the safe solitude of their own homes whilst communicating through robots acting as surrogates. The robots not only carry out the lives of the humans, they also look like them with an enhanced physical appearance. Bruce Willis stars as FBI Agent Greer who assigns his own surrogate to help him inspect the murder of a college student with links to the creator of the surrogates. As the complexity of the case intensifies, however, the reclusive detective realises that in order to have a chance of catching the killer he must brave the outside world, leaving the safety of his own home. With the help of Agent Peters (Radha Mitchell), Agent Greer attempts to track down the killer and uncover the intrigue surrounding the surrogate facade.
Din aceeasi serie:
Sunshine 2007 DVD Sunshine Blu-Ray Super 8 2011 Blu-ray / 4K Ultra HD + Blu-ray (10th Anniversary) Super 8 Blu-Ray Super 8 DVD Surrogates DVD Synchronic 2019 Blu-ray Synchronic 2019 DVD Synchronicity DVD Taking Earth DVD